In economy class, each Air China passenger can carry one piece of hand luggage with a maximum size of 55 x 40 x 20 cm and a maximum weight of 5 kilograms. 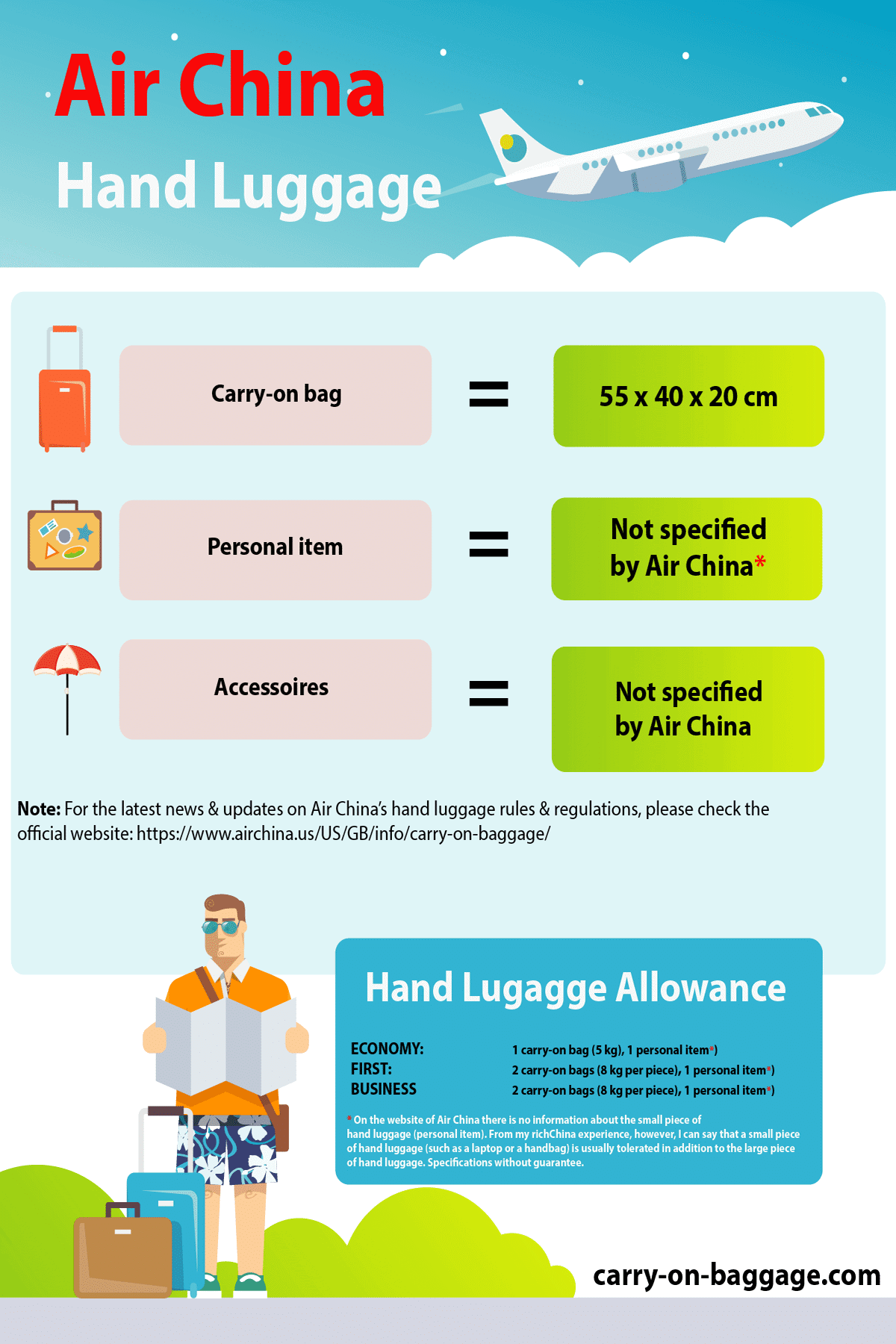 Children aged 0-2 years are not entitled to carry-on baggage at Air China.

Children 2 years and older are entitled to the same hand baggage allowance as adults on Air China.

What about liquids in hand luggage at Air China?

China adheres to international standards when it comes to liquids on board. Thus the same applies to liquids in hand luggage as in Europe or the US (known in the USA under the name Liquids 3-1-1 Rule). The rules for liquids (including both creams and aerosols) are as follows:

If you are travelling from Europe to China, you can take practically all solid food with you in your hand luggage, as long as you eat it during the journey and do not want to import it to China.

For example, you can easily take snacks with you in your hand luggage: Sandwiches, chips, chocolate and even meat snacks are allowed.

This does not mean, however, that you are allowed to import these foods into China. Especially for milk and meat products, there are strict import bans (not only in China but in general almost everywhere in the world as far as the import of such products from third countries is concerned).

Air China: Pets on board

Dogs and cats can be transported as “special baggage” in Air China’s cargo hold. The following rules must be observed in particular:

To transport pets with Air China, you must also have a suitable pet carrier. As a rule, these containers must comply with IATA guidelines.

However, Air China’s website states that the container must meet a Chinese standard, National Standards GBT26543-2011, People’s Republic of China – General Requirements of the Packing of Live Animals for Air Transportation.

On the following page, you will find an overview of the requirements according to this document.

Transporting a musical instrument by air is often more complicated than one would like.

Most airlines do provide good information on how to transport musical instruments in the passenger cabin (or in the cargo hold), however, the problem is that each airline has its own rules & regulations when it comes to the carriage of musical instruments on airplanes.

An international standard for the transport of musical instruments in airplanes? Don’t even think about it. Unfortunately, there is no such thing (yet).

Well, what about Air China and musical instruments then?

Unfortunately, Air China does not provide much information on this on its official website. After a long search, we could only find the most basic information in a Q&A session at Air China. We have summarized the information for you:

Air China allows musical instruments in the cabin if they comply with the regular hand luggage regulations (in terms of size and weight).

In plain language, this means that you may only bring musical instruments on board (cabin) if they are no larger than 55 x 40 x 20 cm and no heavier than 5 kilograms (economy class) or 8 kilograms (first/business class).

n this case, Air China does not specify exactly which musical instruments may be transported in an additional seat.

How strict is Air China about hand luggage?

Air China can be described as a less strict airline when it comes to hand luggage. I have travelled a lot in China in recent years and my hand luggage has never been checked for weight and/or size. Neither in China nor in Europe.

Of course, it also plays a role what kind of hand luggage (appearance, size, etc.) you have with you and what routes (airports) you travel. Some airports have stricter controls than others.

I always had a standard piece of hand luggage (trolley) with me, which probably doesn’t look really suspicious.

In general, you should make sure that your hand luggage does not exceed the maximum dimensions. As long as the size of your hand luggage is within the allowed maximum, most airlines still do not weigh it (regularly).

Attention: When travelling in China, absolutely to consider

In China, many aspects of baggage are subject to the same regulations as in the EU and the USA. For example, the liquid rule for liquids in hand luggage is the same as in the EU and also in the USA (in the USA we are talking about the Liquids 3-1-1 rule).

However, there are certain differences: for example, it is strictly forbidden in China to take lighters and matches with you on flights.

And not only in the hand luggage as well as in the checked luggage but also on the body. In Europe, on the other hand, one lighter or one box of matches per passenger may be transported on the body. But not in China.

How to best get in contact with Air China

Through these channels, you can ask questions to Air China (including questions about hand luggage and checked baggage) as long as you are outside mainland China:

The hotline number for calls from the US is:

According to Air China’s website, there is no direct hotline number for calls from individual European countries. But there is a number for customers in Europe in general:

Air China does not currently offer a live chat function, as is the case with easyJet, Condor or Ryanair, for example.

Can I bring a handbag on Air China in addition to my large piece of hand luggage?

I have been travelling a lot in China in recent years, have often flown with Air China (both in China and internationally) and always had two pieces of hand luggage with me. There were never any problems with that.

Can I carry a Powerbank in my hand luggage at Air China?

Can I carry a lighter on Air China flights?

No. Lighters are prohibited on Air China flights, in hand luggage, checked baggage and on the body. Lighters and matches are generally prohibited in China when travelling by air.

Can I take a shaver with me in Air China hand luggage?

An electric shaver is no problem in hand luggage. The same applies to epilators. Traditional wet razors, on the other hand, are prohibited. If they are wet razors with blades behind bars, this is fine (disposable razors). Razor blades are forbidden in hand luggage.

Is Air China a member of the International Air Transport Association (IATA)?