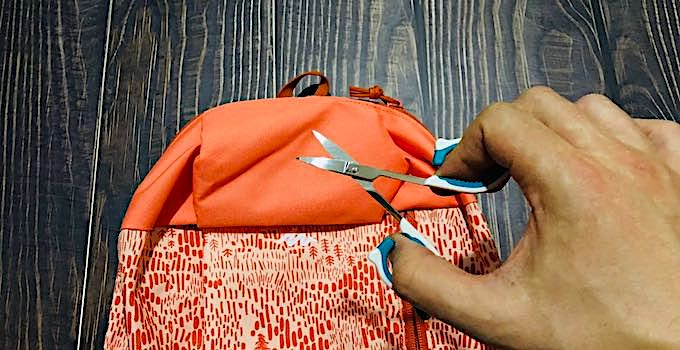 Nail scissors are generally allowed in hand luggage in the EU. However, nail scissors with blades of more than 6 cm as measured from the fulcrum are forbidden in hand luggage. This regulation is based on the EU Regulation 2015/1998. Since pointed objects in hand luggage are generally prohibited, as they could be used as weapons under certain circumstances, problems can sometimes arise at the security check even with nail scissors that actually comply with these rules. Ultimately, it is always the personnel at the security checkpoint who decide whether an object is allowed to pass through the checkpoint or not. A residual risk also remains when transporting nail scissors in accordance with the rules.

We see there that based on the EU regulation 2015/1998, scissors with a blade length of more than 6 cm from the pivot point in hand luggage are prohibited.

On the other hand, the general terms and conditions of the various airlines also indicate whether nail scissors may or may not be carried in hand luggage.

For example, in the general terms and conditions of carriage of Ryanair we find the following information under point 8.4.9:

Pointed/edged Weapons & Sharp Objects must be carried in checked baggage; pointed or bladed articles capable of causing injury, including axes & hatchets, cleavers, arrows and darts, crampons (grappling iron, hooked bar of iron, or plate with iron spikes used in mountaineering), harpoons & spears, ice axes & ice picks, ice skates, knives with blades of more than 6 cms including lockable or flick knives, ceremonial, religious and hunting knives, made of metal or any other material strong enough to be used as a potential weapon, meat cleavers, machetes, open razors and blades (excluding safety or disposable razors with blades enclosed in cartridge), sabres, swords and swordsticks, scalpels,  scissors with blades more than 6 cms as measured from the fulcrum,  ski and walking/hiking poles, throwing stars, tradesman’s tools with a blade or a shaft of more than 6 cms that have the potential to be used as a pointed or edged weapon, e.g. drills and drill bits, box cutters, utility knives, all saws, screwdrivers, chisels, crowbars, hammers, pliers, wrenches/spanners, blow torches.

Nail scissors in hand luggage in the US

In the US, too, the length of the blade determines whether the nail scissors are allowed in hand luggage and thus in the cabin of the aircraft or not. In the US, however, they are not talking about the measurements taken from the fulcrum but rather from the “pivot point”. However, this is just different terminology. It also refers to the point where the blade begins, basically. If you look at this picture here, you will immediately know what it means.

In the US, the nail scissors must be less than 4 inches long from the pivot point in order to be approved for transport in hand luggage.

Nail scissors of any size are also welcome in checked baggage in the US.

You can find out more about nail scissors in hand luggage in the US at the American Transport Security Agency (TSA).

Absolutely. You can bring nail scissors in any size in your checked baggage. Please make sure that they are sheated or securely wrapped to prevent injury to baggage handlers and inspectors.

Can you bring nail polish in your carry-on bag?

Yes, nail polish, also known as nail varnish, can be packed in your hand luggage. However, please pay attention to observe the liquids rule. Essentially, the rule states that you can only bring liquids in containers that are not exceeding 100 ml each (3.4 oz) and you will need to place these liquids in the bag of liquids (zipper-bag, transparent & resealable, max. volume of 1 litre).

The 3-1-1 Rule is a rule about the transport of liquids in hand luggage in the US. The American Transportation Administration (TSA) enforces this rule. The rule states that each passenger is only allowed to carry liquids (includes gels, aerosols, cremes, etc.) in containers that do not exceed 100 ml (corresponds to 3.4 ounces). These containers need to be stored in the so-called bag of liquids, a transparent and resealable quart-size bag. Only one such bag per passenger is allowed and the maximum volume of that bag may not surpass 1 litre.

How many 100 ml bottles can I take in my hand luggage?

The important thing to remember here is that you need to store all your 100 ml bottles in the bag of liquids. This bag of liquids must not exceed a volume of 1 litre. You do the math.

Can I bring lotion on a plane?

Yes, you can bring lotion on a plane in your hand luggage. The regulations for liquids in hand luggage apply here though, same as for all liquids, gels, cremes and aerosols. So, you would need to make sure that the lotion container does not exceed 100 ml and that you pack the container(s) in the bag of liquids. Only one such bag per person is allowed.