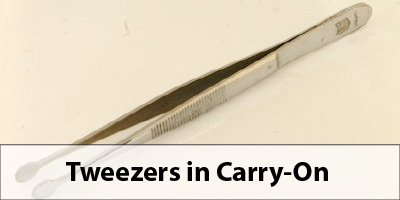 Security controls at the airport can be annoying at times. And most of us, have probably already been forced a couple of times to leave behind some of our precious travel items at the security checkpoint. Maybe a Zippo or a Swiss Army Knife. Or maybe you just had half a bottle of Coke in your backpack that you have already forgotten about. It happens. We all know that. But how are you all dealing with those problems?

I prefer it if I can go to the security check with a clear conscience, without having to constantly think about whether my object XYZ makes it through the security check or not. That’s why I like to research in advance about “problematic items,” so that I can go to the airport without having to worry about it. One item that I researched is “Tweezers”. And today, I would like to share the results of my research with all of you.

Can I carry tweezers in my carry-on baggage?

In general, the airlines are in favour of transporting tweezers in carry-on baggage. Whether tweezers can be transported in carry-on baggage, however, ultimately depends on the decision of the security personnel at the security checkpoint. If the tweezers are classified as a dangerous pointed object (rather unlikely!), you may have to leave them behind at the security checkpoint. To minimize the probability that this case will occur, you should, therefore, take care to bring a small tweezer that is as inconspicuous as possible and has rounded corners and ends.

What the airlines say about tweezers in carry-on baggage

Most airlines do not comment directly on the subject of tweezers in hand luggage. A visit to the airline websites usually does not lead to the desired search results, as the tweezers can often not be found either in the permitted items on board or in the prohibited items on board.

However, some airlines list the tweezers by name under the category “pointed objects” or “sharp objects”.  A problem that arises here and with all items transported in baggage is the fact that security checks are NOT carried out by the airlines themselves, but by airport personnel.

This makes it easier to explain that objects that are declared “permitted” by the airline may in some cases still not make it through the security checkpoint.

But now let’s have a closer look at what different airlines have to say about tweezers in hand luggage.

What Easyjet says about tweezers in hand luggage

So what does Easyjet say about tweezers, for example? On their website, more specifically in the section  “Restricted and Unusual Objects”, you can find the following info:

Tweezers and scissors with rounded ends and blades with a length of less than 6 cm may be taken into the cabin.easyJet

That’s what Ryanair says about tweezers in carry-on baggage

Well, not much, to be honest. Because Ryanair says nothing about tweezers in carry-on baggage. At least not on their website. At least not directly. In their General Terms and Conditions you can find the following info:

The question now is obviously: Are tweezers falling under that category or not? To make sure, I contacted Ryanair via the live chat to explicitly ask again about their policy on tweezers in carry-on. Urszula from Ryanair said to me: “Yes, of course. You can transport tweezers in Carry-On Baggage without any problems.

So you have to hope that the security staff at the security checkpoint will see it the same way Urszula does, and then nothing should stand in the way of transporting your tweezers.

British Airways is in favour of tweezers in carry-on and checked baggage:

Tweezers in carry-on baggage when travelling to/from the USA

The USA is a real trendsetter when it comes to new rules and regulations for hand luggage and checked baggage. In the United States, the Transport Security Administration (TSA) is responsible for public safety in air travel. Many of the regulations and rules that we have to comply with here in Europe were originally forged in the states. The USA is known for its particularly strict rules on baggage and passenger safety.

So how does the TSA see it with tweezers? Do they see it as a disguised murder weapon or do they simply accept tweezers as useful cosmetic utensils?

The good thing about the TSA is that they have a great website where all items are clearly listed and you can see at a glance what is allowed and what is not. At least theoretically. We now know that in practice, i.e. at the security checkpoint, sometimes everything looks a bit different than on the paper…

Nevertheless, a look at the list is, of course, a good indicator of whether you might or might not get into trouble with your tweezers at the airport in the US.

The page about tweezers at the TSA states the following:

It should be noted, therefore, that at least according to the TSA website tweezers are officially allowed in hand luggage. However, even in the USA, you can fall victim to a bad-tempered (or perhaps ill-informed) security officer at the security checkpoint and that might still mean “bye bye tweezers”.

A warning at the end of the TSA page about tweezers also says:

The final decision rests with the TSA officer on whether an item is allowed through the checkpoint.TSA

To conclude this article, I would now like to say something pleasant. Of course, transporting tweezers in checked baggage is not a problem. So if you are travelling with both hand luggage and checked luggage, the best thing to do is to simply place the tweezers in your checked luggage. So there’s guaranteed no stress.

In general, for sharp and pointed objects, transport in checked baggage is practically always the better choice.

When transporting in checked baggage, however, it is important to make sure that the sharp and pointed objects are securely packed so that no one can injure themselves. This requirement can also be found explicitly in the general terms and conditions of the airlines. At Ryanair, for example, this is the case:

All sharp objects in checked baggage must be securely packed to avoid injury to personnel when searching and handling your baggage.Ryanair, General Terms and Conditions, 8.4.8