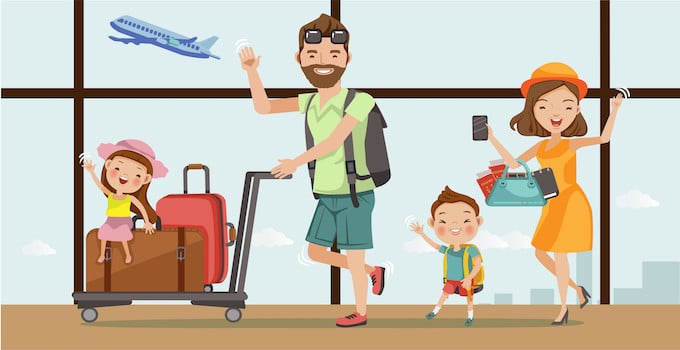 If this is the case, you can already get rid of your baggage the day before departure and relax without having to worry about the check-in on the day of your flight. This stress-relieving check-in method goes by the name of “early check-in”. However, there are other glorious names for it:

So five different names for the same thing? Well, yes. That didn’t exactly help my research on this topic, to be honest.

So it took me a long time to gather all the information about the so-called early check-in.

Never mind, the research is done now and I would now like to present you the hard facts about the early check-in. So let’s dive right into the fun! Oh and before I forget about it: In this article, we will refer to this kind of check-in as “early check-in” only – to avoid confusion!

What is early check-in?

Which airlines offer the early check-in?

Attention: The early check-in is only offered by these airlines at selected airports.

Who is the early check-in suitable for?

The early check-in is suitable primarily for families, senior citizens, and smaller groups and generally for people who take an early flight the following day.

The early check-in allows you to check in your luggage the day before the flight, receive your boarding passes and then go directly to the security checkpoint the day of your flight. This reduces stress and waiting times at the airport to an absolute minimum.

What do I need to bring when checking in the evening before?

To ensure that everything goes smoothly at the check-in the evening before, you must in principle bring the same documents with you as you would have to present at a regular check-in. This includes

Of course, you must also bring your checked baggage. Otherwise, the whole thing does not make so much sense.

How much does the early check-in cost?

The costs for the early check-in vary depending on the airline. While this kind of check-in is free with some airlines, other airlines charge around 5 pounds per person for it.

What are the restrictions of the early check-in?

Early check-in for animals is usually not possible.

Larger groups may not be able to benefit from the early check-in.

Musical instruments may not qualify for early check-in either (ask the airline to double-check).

Do all flight passengers have to be present at the early check-in?

Depends on the airline.

Some airlines require the personal appearance of all passengers.

With some airlines, it is ok if a family member completes the early check-in for the whole family. In this case, the family member must bring all identity cards/passports and, if applicable, tickets for all family members.

With some airlines, even a non-passenger can check in the evening before the flight. The non-passenger must then, of course, bring along the identity cards/passports and, if applicable, tickets of the passengers.

To find out, get in touch with your airline. If you are lucky, you might also find this info on the website of your airline.

For which time window is the early check-in offered?

The time window, therefore, differs from airline to airline and also from airport to airport.

In the UK and Ireland

The only airline offering early check-in in Ireland is Aer Lingus (at Dublin Airport and Cork Airport).

Unfortunately, there is no early check-in at Belfast International airport.

None of the airlines located at Birmingham Airport offer early check-in.

No early check-ins at Bristol Airport either.

None of the airlines at London Stansted Airport offers an early check-in service.

In Germany, Switzerland and Austria

Please note that most of these airlines only offer an early check-in at a few airports.

In the following list, you will see exactly which airline offers an early check-in at which airports.

* The evening before check-in is not offered for connecting flights to the USA if the flight across the Atlantic is operated by a US airline.

** Eurowings does not offer an evening before check-in for flights to the USA.

How early can you check-in for a regular flight WITHOUT early check-in? It depends. Most airlines will allow you to check-in at about two hours before departure. In some cases (most on long-haul flights), the check-in is already possible 3 hours before the flight. Bag drop desks are often already open 4 hours prior to departure.

I would rather advise you to be there 3 hours before take off. Why? Well, there are lots of things that can go wrong. And depending on the items that you are carrying in your luggage, there might be some additional delays.

For instance, you might have some forbidden items in your hand luggage, which will lead to a delay at the security checkpoint.

Other reasons for an early arrival at the airport are:

Is it better to check-in online or at the airport? I don’t see any reason why you should not use the online check-in. Like this, you are likely to save some time at the airport, which is generally a good thing. If you do have plenty of time anyway,  then checking in at the airport should just do fine. However, please note, that checking in online might be mandatory for some airlines (maybe only for some tariffs)

What other check-in options are there? Most airlines offer regular check-in at the airport, online check-in, bag drop check-in, and mobile check-in.